This story began last November/December when I met a lovely cat who I named Coco, last winter in 2018.  Over the course of the next 10 months, I had the privilege of getting to know Coco and her baby, Pepper. I attempted to get Coco fixed in March but unfortunately that collaboration with a rescuer fell through. I'd like to think that I gained a certain level of trust with Coco because I adopted the first baby she introduced me to (Pepper), and took in her second baby (Gin Gin) from outdoors (it's no place for an 8 week old kitten) earlier this year on September 7th.

On October 9th, I reached out to Advocat Rescue for help to find an adopter for baby Gin Gin. The rescue required Gin Gin to be up to date on all of her shots. After receiving the last of Gin Gin's shots and bloodwork on October 12th, that afternoon I sat down in my office toward the back of my home and breathed a sigh of relief thinking, "I'm almost done..."... Well... God had something else in mind. I heard a high-pitched meow from my backyard. (Imagine hand on forehead).

I went outside to investigate and there was a small black 5 to 6-week-old kitten with the classic appearance of a tuxedo cat inclusive of white socks and blue eyes meowing and walking toward me. One eye was slightly closed from an infection. A few moments later Coco appeared with an adorable black and white cow-kitten with a black diamond on the baby's chest. Later that afternoon... I saw a round tortie kitten and eye-catching green-eyed calico kitten across the street in the parking lot of Saint Peter’s Lutheran Church. Coco carried all four kittens to my yard across the street from Saint Peter’s Lutheran Church where they remained until October 17th. I notified the rescue immediately of their presence on October 12th. However, the rescue and I were uncertain the babies were eating on their own. While in my backyard the kittens ate the kitten food that I provided and I saw Coco work to prevent them from nursing.

The night of October 17th, there was a rough rainstorm, and then a wind storm occurred the next day. Cats do not like heavy wind just as much as they do not like heavy rain. By Saturday, October 19th, Coco had carried the kittens across the street to a neighbor's backyard connected to the parking lot of Saint Peter’s Lutheran Church. They had burrowed deeply beneath a thicket of branches next to a tree in between two low fences.

I finally saw all four kittens on Thursday afternoon on October 24th around 1pm.  I entered the yard of one of my neighbors who provided me with permission to enter to look for the kittens and was rewarded with the sight of them eating and walking back to their hideout in the next yard by a tree surrounded by a thicket of branches layered on top of each other. I reached out to Tamara, aka Rockstar-Kitty-Catching-Ninja, and Jana, Kitty-Rescue-Angel from @advocatrescue, immediately as my phone was dying at 1%! Tamara, a very experienced kitty rescuer, arrived shortly after my call. After the traps were set in their feeding area, we checked out the tree surrounded by branches located between two short fences in my neighbor’s yard bordering the parking lot of Saint Peter’s Lutheran Church. We immediately saw the cow kitten who had one eye open and the other shut. Tamara was able to see a few of the others through the branches and noticed they had closed eyes from infection. She immediately began tearing through the thicket of branches and forgotten items to reach the kittens for 2 hours with her bare hands. These babies were well hidden ... their Mom, Coco, certainly taught them how to protect themselves. We found the #cowcat and #tuxie inside a dirt-filled penny jar. The #Calico and #Tortie were found beneath branches. Tamara literally pulled and caught the kittens out from their hiding spot with a net and towel. The traps were unused. I caught the tuxie when he tried to run (And I felt tears when I thought I held him too tight.) I can’t express how grateful I am to have HELP to rescue Coco’s last litter (Yes! Advocat Rescue spayed Coco Tuesday after Tamara caught her Monday!✨🤗) Because of Pastor Clarke, my neighbors, Tamara, and Jana from Advocat Rescue, All FOUR of Coco’s Babies will receive much needed medical care for their eye and upper respiratory infections, deworming, FVRCP shots, bloodwork and additional medical help needed. Once the kittens are healthy, they will be fostered until adopted through @advocatrescue!

A Huge Thank You to Pastor Clarke and Saint Peter’s Lutheran Church for giving me access to the parking lot over the two weeks leading up to the kitten rescue on October 24th! A Huge Thank You to my wonderful neighbor Bernice and my neighbors across the street from my house for allowing me access to their backyards! I truly appreciated everyone's support with this endeavor!

This summer, I went to camp McAlister for the second time. McAlister is a YMCA sleepaway camp. The bus ride was about two and a half hours long. To pass the time, I sang camp songs in my head and tried to remember my friends from last year. I was actually surprised that I remembered their name. When I arrived, I was taken to the cabin I would be staying in. The name of my cabin was Delaware. When everyone got there, we started decorating. Then, we hung out until dinnertime. It turns out McAlister has changed since I’ve last been there. Last year, each individual person had to get their own meals and the kitchen staff would forget to make dessert from time to time. This year, the kitchen patrol (KP), which is a camper from each cabin, would get the meals for their cabin, so everybody didn’t have to get up and wait in a long line. After dinner was the opening ceremony, where they welcome old campers back and introduce new campers to the ways of McAlister.

Before breakfast and lunch, and after dinner, we have something called chapel. And no, it has nothing to do with a church. Its just something we do to get the camp spirit going. It also gets our appetites going. We swim in a lake that is divided into three sections, red, for beginners, yellow for average swimmers, and green, for the advanced swimmers and for people who are brave enough to swim with the danger of fish bites. Some counselors can’t even make it in to yellow. Speaking of counselors, I had lots of cool friends and counselors. I had a Russian friend, a Turkish friend, a Grenadian friend, and lots more. It was the same with the counselors. I had a Spanish one, an Australian one, and more. It was like having the whole world in one place.

There were activities like critter hunting, camping, scavenger hunts, and more. We also roasted marshmallows and made s’mores. During the weekend, we had to say goodbye to the one-week campers. We also had to pack up and move to our weekend cabins. It was a good way to make new friends in different cabins. On Monday, we went back to our normal cabins and did the whole week over. On the last day, awards were given out to the people who deserved them. The next day, I was back home with my family. 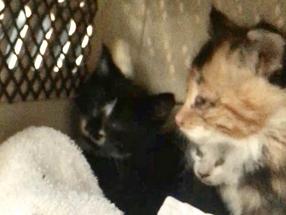 WE DID IT! ✨We Caught ALL Four of Coco’s babies on Thursday, October 24th between 4pm and 6pm! This was a true TEAM EFFORT that involved myself, Crystal Hayes, THREE Neighbors, and Pastor Clarke from Saint Peter’s Lutheran Church over the course of 7-14 days!